Take a musical journey through one of the most electrifying and impactful times America has ever seen.

Find your old tie-dye t-shirt, bell-bottom jeans, love beads, and time-warp back to 1967 and the San Francisco Bay area, the epicenter of the psychedelic music scene.

Grab your seat for a wild, Bill Graham-Fillmore West experience like no other.

Let the music of The Doors, Jefferson Airplane, Grateful Dead, and Janis Joplin tickle your memories.

Immerse your senses in the electrifying video show projection accompanying each song, created by Ben Krywosz, original designer, and operator at the Filmore West and other Bay area venues.

The light show itself is a highlight of this experience, being "improvisational and hands-on, conjuring up swiftly changing, kaleidoscopic images that ebb and flow with the music"

Behind the Scenes
Magic Carpet Ride has been expertly created by Gary Rue and Ben Krywosz  to bring audiences back to the days when Bay area musicians were making an impact on the social fabric of our country.

The exacting musicianship of the band is supercharged by the additional band member, the light show.

The Light Show:
Ben Krywosz* 's lighting company, Albatross, designed and operated shows for many national groups at Fillmore West and other Bay area venues in San Francisco between 1967 and 1972, among them, BLUE CHEER and IT’S A BEAUTIFUL DAY. They also provided lighting for productions of TOMMY, JESUS CHRIST SUPERSTAR, MARAT/SADE, and J.B.

This show is Unique. Imaginative. Historical. Artful.
EVERYBODY should be experienced!
Here are comments from audience members:

"Omgoodness! That was the best!!!!I hope we have the opportunity to see it again!”

"Wow! Loved it! ...Ben's light show was fantabulous! All your performers were such fine singers and musicians and obviously really into it; the coordination between light show and live performing was perfect!”

"...fabulous concert last night! Such talent. Looked like you were having a lot of fun too."

"It really was incredible!"

"VERY talented and entertaining group of musicians. A trip way back in time to 1967!" 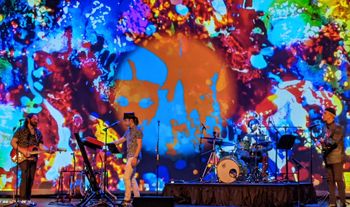 The photo shows the workings of Ben Krywosz and crew designing lighting for the debut of "Magic Carpet Ride: The Music of San Francisco". Ben (Nautilus Theater) designed and operated lighting shows at various venues in the Bay area from the late 60s to early 70s. This light show is guaranteed to dazzle (the work will be based on Ben's original elements from 1967) and the musicians are terrific! (Think Jefferson Airplane, Doors, Procol Harum, the Grateful Dead and more!)